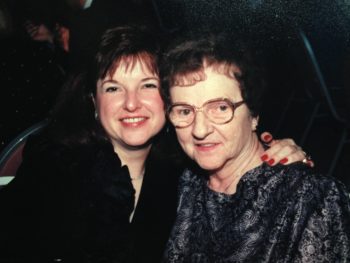 There was a time when I felt insulted when someone said: “You’re just like your mother.”  It usually came from an old boyfriend – or husband – who was trying to ruffle my feathers. And they were usually quite successful at annoying me with that one sentence.  But with time, I have come to realize and appreciate and be humbled by all that she did for me; by all that she gave up for me.

As long as I can remember, my mother worked the midnight shift in a factory.  She often told me stories of her co-workers losing a finger because they reached too far into the machine she called a punch press.  It happened so often that the company had to figure out a way to solve this problem.  And you know what they did?  They chained everyone’s hands to the table so they couldn’t reach so far into the machine.  Can you imagine being physically chained to your desk for eight hours each day, every day?  Obviously, this was before the days of OSHA.

Well, because of my mom’s feistiness, her co-workers voted her to be the shop steward so she could fight for their rights.  And because of her, definite changes were made to make it a better workplace for everyone.

To say that she had a strong personality is putting it lightly, and because of that I have become the strong and independent woman I am today.  So now on those days when I feel a bit of a setback, and it sometimes feels like the walls are falling in around me, I draw from her feistiness.  I can honestly say that I am proud to be her daughter – to stand up and say:

« The Possibilities of Aging
Are You True to Yourself? »