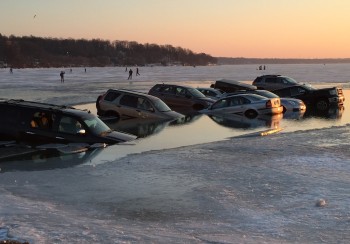 Just a few days ago, my husband and I took a short trip to Lake Geneva, Wisconsin. They were having their annual Winterfest where they host the US National snow sculpture contest.   And they did not disappoint.  Beautifully detailed snow statues lined the lake front. Then I heard a voice in the crowd say:

“Did you see the cars in the lake?”

And I thought – what a novel idea for an art display. So we headed down the street, and there at the end of the snow sculptures, were about a dozen cars floating in Lake Geneva, just off the shore.  It seemed so surreal that I really believed they were purposely driven out there as part of the Winterfest exhibits.  After all, what else could it be?  When I mentioned that to my husband, someone behind me replied:

“Uh, no, people actually parked their cars on the ice and they fell through.”

Apparently, cars have parked on the ice every single year and were safe, but obviously, not this year.

Now, my heart went out to these families. Not only did they lose their car, but they had no idea how they were going to get home… and who knows what the final cost of the damage will be. I’m sure they were beating themselves up over their decision to park on the ice.

That’s when I remembered the topic of one of my speeches on positive attitude:

You make the best decision you can at the time with the information you have.

Yes, I really believe this. Think about it – you rarely make a bad decision intentionally.  Those people who parked on the ice didn’t say:

“Hey, let’s park on the frozen lake so when the ice melts, our cars will fall through and they will be totaled.”

They assessed the situation, saw other cars on the ice, knew that it had been done in past years with no regrets, and actually made a good decision at the time with the information they had.

So if you think of it that way – I made the best decision I could at the time with the information I had – eventually you can let go of any challenging situation that may be facing you, so you can begin to move forward with your life. No matter what the situation is, no matter how bleak it seems at the moment, eventually you have to let go so you can open yourself up to new opportunities.

What decisions have you made that seemed ok at the time, but didn’t turn out exactly the way you hoped. Looking back, was it a good decision at the time you made it?

« Aging to Perfection
Making an Impact! »

4 thoughts on “Well, It Seemed Like a Good Idea at the Time”