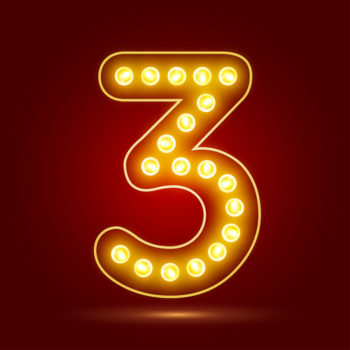 Yep, I discovered The Rule of Three when my life was quite messy.  It’s the sixth technique I’m going to share with you during this “How to Get Back on Your Feet” series.

This is what happened:

I started noticing that there were some things in my life that kept coming back to me over and over again, like the word Toastmasters.  I’d never heard about this group, but several people told me to look into it – that I might be interested.

At first I ignored them, but the third time I heard the word Toastmasters, I went home and Googled it.  I found out they are an international organization whose members give speeches at their club meetings, then are evaluated by their peers.  They promote communication, public speaking and leadership skills.  Although I didn’t give any speeches at the time, I decided to give it a try.

Today, Toastmasters is probably one of the major contributions that led me to being a Professional Speaker.   I met so many people who helped me get my new business off the ground and turn it into the success it is today.

Another time The Rule of Three changed my life happened when my young friend, Karla, suggested I try online dating.  Now, realize that I was 63 years old at the time and I had vowed to never let another man in my life.  But somehow, she convinced me to try it and “just see what happens.”

At that time, I lived in Chicago and I never planned on leaving the city – NEVER!

After a couple of weeks on eHarmony, a picture of a sweet-smiling guy popped up.  I was interested, that is until I saw that he lived in Madison, Wisconsin.

Nope, not for me.  I’m not leaving Chicago.

But the third time his photo appeared, I sent him an invitation.  And as they say, the rest is history.

I now live in Madison, Wisconsin.  We got married a couple of years ago.

So I’ve learned that when something comes back to me three times, I have to  stop and take notice  That doesn’t mean that I have to follow through, but I do have to look at it carefully, research it, then decide what’s best for me.

Remember, you never know what life will throw your way.  It just may be worth taking a closer look.  Paying attention to The Rule of Three has certainly taken my life in different directions, and I couldn’t be happier.