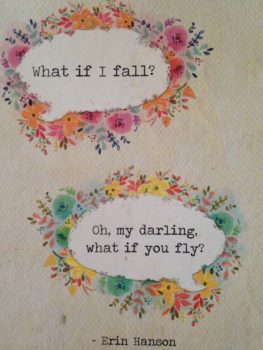 I was walking through Staples, and suddenly it seemed like this journal jumped out at me.  I mean it really seemed to leap from the shelf.  I saw this quote and I just had to have it:

What if I fall?
OH, MY DARLING, WHAT IF YOU FLY?

Has this ever happened to you?  That suddenly, unexpectedly, something “speaks” to you and it literally sends shivers up your spine.  You can’t explain it – and you can’t deny it.

It seems that our lives are often filled with “What if.”  Those two words can stop us in our tracks and paralyze us with fear.  So as we enter into a new year, here is my challenge to you: 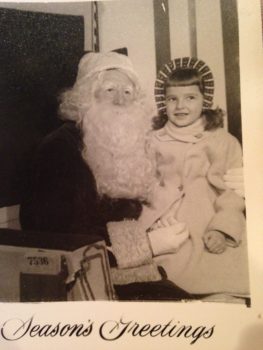 At seven years old, I sat on Santa Claus’ lap and I believed in him and all he stood for.  So many years later, I still believe.

I believe we can…

Delight in our own uniqueness

Stop and listen to the music in our heart

Be kind to ourselves

As I write this list, I can’t help but think of the movie The Polar Express and the theme of believing.  As Santa Claus takes the bell and hands it to the little boy, he says: “This bell is a wonderful symbol of the spirit of Christmas – as am I.  Just remember, the true spirit of Christmas lies in your heart.”

It doesn’t matter what holiday you celebrate, or what faith you practice, the power of believing keeps us all strong and hopeful and alive.  During this holiday season, I raise a toast to you and all that you can accomplish if you choose to believe. 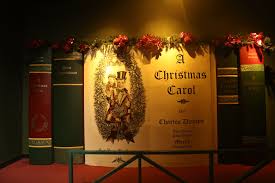 A Christmas Carol by Charles Dickens.  Have you heard of it?

This one story has been told through films, stage plays, operas and so much more. I know it so well that I could probably repeat it without any help at all.

The one thing I didn’t know was the backstory.  How it went from a blank piece of paper to one of the most popular stories of all time.

So when my brother and I decided to go to a movie called “The Man Who Invented Christmas,” I had no idea it was about Charles Dickens and how he created A Christmas Carol.  In fact, I had never even heard of this movie, but I love Christmas and it was the only one playing at the local theater with a holiday theme, so off we went.

It was amazing – I LOVED it!  And it made a huge impact on me.

Did you know that Charles Dickens went from great wealth to suffering from financial problems  just before A Christmas Carol was published?

Did you know that as a 12 year old boy, he was left to work in a filthy, rat-infested factory?  This haunted him just like the ghosts that haunt Scrooge in his book.

Did you know that many people told him the idea of A Christmas Carol would never work?  His publisher, printer, illustrator – all told him “no” at some point, yet he persisted and refused to give up.

Now I know that there are many Hollywood touches to make this story come to life on the big screen, so I did some research.   Much of it is true – a very fascinating story.

If you are interested in seeing the trailer before you invest the 10, 12, or 14 dollars to see this movie, check this out: https://binged.it/2z3w9iR.

Even if Christmas and the holiday season aren’t your time of year, you can’t deny the determination, relentless attitude and belief in himself that Charles Dickens had.  It made me think of all the times I almost quit because someone didn’t believe in me.  This movie is a reminder that once you put your mind to something, great things can be accomplished.  Charles Dickens wrote A Christmas Carol in six weeks – YES – six weeks.  Now just imagine what you can accomplish once you set your mind to it. 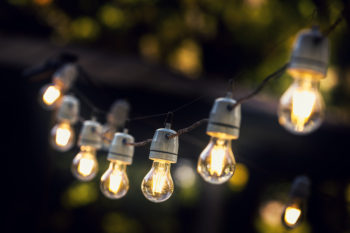 It was a night to celebrate.  My dear friend just became a grandfather for the first time and he wanted to treat us to our beverage of choice.  Since he is Irish, we headed to the nearest Irish Pub and he ordered Guinness for everyone.   We were all laughing, toasting and enjoying our friendship, when suddenly the lights that were strung above our heads came crashing down – broken glass and sparks flying everywhere.  The strand landed between my two friends and it was truly a miracle, kismet, or whatever you want to call it that no one was hurt.

What amazed me, though, was the reaction of the owner.  We were the only group sitting on the patio at this point, so the server calmly walked into the restaurant and called the owner.  When she saw what happened, she quietly asked “are you ok?”  Then, without even waiting for an answer, she started rearranging the chairs on the patio.

Wait!  That’s it!!!  As one friend was holding her hand to see if any glass had wedged itself under her skin, and another friend was brushing broken glass from her purse and from of her dress, the owner was moving chairs around???  Her lack of emotion and compassion still astounds me.

I wanted to scream: “Can I see your manager?  I want to talk to someone who cares!” but there she was –  the boss, the owner, the person in charge – and she couldn’t care less.

So this morning, as I think about how lucky we all were that no one got hurt, I find myself confused and annoyed at the lack of customer service and overall consideration that we received.  Because of that, I’d like to share with you the three techniques I feature in my customer service presentation:

Understanding and practicing each of these will guarantee that your clients or customers will never suffer the lack of consideration that we did.  Stay tuned next week and I’ll give you more information on each.  It’s good stuff and something you can start using immediately even at home with your family.