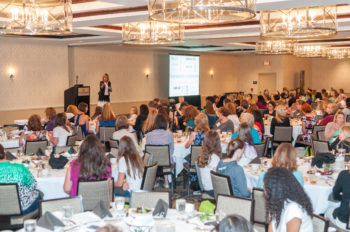 Have you ever heard the words: “Oh, you’re too old for that…” I’ve certainly heard it a LOT, especially when I was starting my own business as a professional speaker. So many friends and family members, all of them really trying to help me, thought I was crazy when I started this business in my 60’s. I realize that deep down they were truly trying to help, and in many cases, they were dealing with fears of their own.

So, now I’m a firm believer that you should always pursue your dreams and desires, no matter what your age is. That’s why I made this short video: Never Too Old.

Oh, and if you’re wondering about the photo, that’s me accomplishing my dream of being a professional speaker and not putting limits on myself. Of course, there are many reasons why we cannot accomplish certain things in life, but never, ever let the number of your age be one of them

One way to ruin a compliment is to follow it with the words: “for your age.”

“You really look great – for your age…”

“You’re a great dancer- for your age…”

What scares me the most is that several of my friends are buying into the theory that they can’t accomplish certain things because of their age.  They truly feel that they are just too old to even start.

Well, did you know that Laura Ingalls Wilder, the famous American writer who wrote the Little House on the Prairie series, began her writing career when she was 65 years old.  She was surprised at her success and told an interviewer after writing her first book: “I thought that would be the end of it.  But what do you think?  Children who read it wrote to me begging for more.  I was amazed because I didn’t know how to write.  I went to little red schoolhouses all over the West and I never was graduated from anything.”  Yet she didn’t let her age stop her from writing her first book – then another and another and another.

And then there was John Glenn.  His mission of almost nine days on the space shuttle orbiter, Discovery, launched when he was 77 years old.  It made him the oldest human to venture into space.  He didn’t stop and think – I’m too old for this.  He just followed his passion without any regard for the number attached to his age.

And the list goes on.  There are so many more people who experienced success far into their “twilight” years.  So the next time you are feeling that you can’t do something because of your age, think again.  Maybe this list will give you some inspiration: https://bit.ly/2KLAIlx.